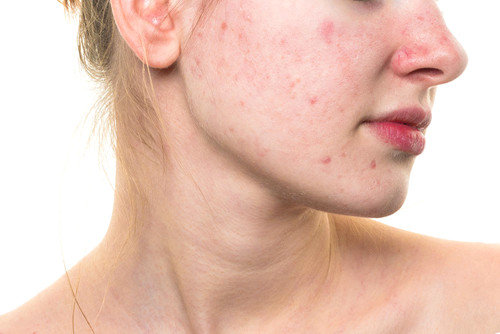 Rosacea is estimated to affect over 45 million people worldwide. It affects white-skinned people of northern European descent, however it has been seen in patients of Indian ancestry or Asian ancestry. It begins as erythema (flushing and redness) on the central face and across the cheeks, nose, or forehead but can also less commonly affect the neck and chest. There are four identified rosacea subtypes:

Richard L. Gallo and colleagues recently noticed that patients with rosacea had elevated levels of the peptide cathelicidin and elevated levels of stratum corneum tryptic enzymes. Antibiotics have been used in the past to treat rosacea, but antibiotics may only work because they inhibit some stratum corneum trypic enzymes. (August 5, 2007 Nature Medicine).

It has also been suggested that triggers that cause episodes of flushing and blushing stimulate development of rosacea. Exposure to temperature extremes can cause the face to become flushed—other triggers include strenuous exercise, sunlight, sunburn, stress, and cold wind. Certain food triggers include alcohol, foods and beverages containing caffeine, and spicy food.

Treatment: A gentle skin cleansing regimen is key—with no use of scrubs or exfoliants. A good brand of cleanser is Skinceuticals® Gentle Cleanser (available at our office). Other brands to try are Dove® sensitive skin bar, Purpose® cleanser, and Cetaphil® gentle cleanser. Protection from the sun is imperative and daily use of a sunscreen of a physical blocker with either zinc or titanium will prevent progression of the disease and will not irritate the skin or eyes (we prefer Skinceuticals® Physical 30, also available at our office).

Oral antibiotics (tetracycline, doxycycline, minocycline) and topical antibiotics such as metronidazole are usually the first line of defense for pustules, inflammation and some redness. Topical azelaic acid such as Finacea® (15%) may help reduce inflammatory lesions, bumps and papules. Oral antibiotics will help to relieve symptoms of ocular rosacea.

Redness of the skin is possibly the most difficult aspect to treat. Laser treatments offer the most efficacious treatments for the redness. They use light to penetrate the top layers of the skin to target the vessels. The laser’s energy is absorbed by oxy-hemoglobin in the vessels which heats capillary walls, damaging them. Over the next few weeks, the vessels are absorbed by the body. Most patients note a decrease in redness and flushing with the first treatment. With several treatments, this method may even eliminate the redness altogether, though additional periodic treatments will likely be necessary to remove newly-formed capillaries. Unfortunately, this treatment is not covered by insurances and is considered cosmetic and the patient is responsible for the cost of the laser treatment.

Please be sure to bring a list of all medications and allergies. If you are covered by an insurance plan that requires prior authorization, the authorization or referral form must be presented to our office before or at the time of your appointment. It is your responsibility to obtain necessary referrals. If you don’t have one, we will ask you to sign a waiver stating you are responsible for the bill. Payment will then be expected at the time of service. Please bring your insurance cards to each visit so the information can be checked and a copy placed in your chart.

Your insurance coverage is an agreement between you and your insurance company. Financial responsibility rests with the patient for deductibles, co-insurances and non-covered services. Insurance coverage is a variable and we cannot guarantee what services will be covered by your particular plan. We will ask you to sign an authorization form requesting that insurance payments be sent directly to our office when appropriate. Co-payments are due at the time of service. For your convenience, we accept personal checks, Visa, MasterCard, Discover, American Express and cash.

A no show fee of $50.00 will be charged to patients who fail to show for their appointment and who give less than 24-hours notice of cancellation.

Surgical specimens are sent to a lab to be analyzed. The fee for this is a separate charge from the office visit and may be billed directly by the processing lab. Results are usually available 7-10 days after the test has been performed. Questions regarding payments for laboratory services should be discussed with the lab.

Prescription refill requests will be taken only during regular office hours.